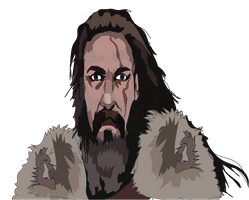 The mighty and powerful viking, Jarl Varg of the Northern realms, have been forced to flee his lands after years of cold summers and stormy winters has given him bad harvests which has left him unable to pay the Gods the offerings they demand.
The sky lights up with lightening and roars with angry thunder every night and most of his underlings has left the village in search of a Jarl that can give the Aesir what they demand. Jarl Varg hears word that his closest neighbour and bitter rival, Jarl Bjørn, is mustering an army to come and finish of whoever is left, to claim the lands for himself. Even if Jarl Varg’s men are famed for their brutality and skill in combat, the few loyal men he has left stand no chance if the cowardly Jarl Bjørn is coming with an entire army.

With his blood raging in his body Jarl Varg watches his life’s work disappear in the horizon as he sails south to a new beginning in the lands of Westfoldir.