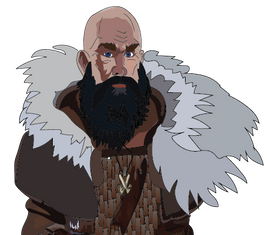 Jarl Bjørn has always ruled in the shadows of his neighbouring Jarl, the mighty Jarl Varg. He has had to live with the fact that his rival attracts the very best Vikings in the lands, while he must make do with the scrap he leaves behind. The rivalry goes back through the generations and now, no one even knows what started the feud between the two families.

After years of being second best, Jarl Bjørn decides to act. He sends his two most loyal men out to the forest, bringing with them the three most beautiful virgins of his clan. In a secret cave inside the forest, they perform a ceremony to attract the attention of Loke and ask for his assistance in evening out the odds.

With a grin, Loke accepts the offering and promises that within two summers, Jarl Bjørn will be the most powerful Jarl of the kingdom. The following years Bjørn has great fortune in whatever he endures, while his rival is plagued with bad weather and failed raids.

When, after the promised two summers, Jarl Bjørn gets word that his foe is weakened to the point that he can barely feed himself he decides to strike. He gathers up his men and rides towards Jarl Vargs lands to finally assure his downfall. Upon arriving in the village, he finds it empty and abandoned. Loke appears before him telling him that he is now the greatest Jarl of the lands, just as promised. Feeling ripped of his chance to smother his foe in man-to-man battle, Bjørn tells Loke that this was not how he wanted to rise to glory and that he wanted to kill his opponent In a fair swordfight. With another grin Loke says “You are not pleased with what you have been given? Well, you cowardly, little man, let me fix that”. Again, Loke disappears. Not two days later Jarl Bjørn’s village has burnt to the ground, his family is dead from illness, and he is left with only a ship, his two loyal companions and a few thralls. A huge snowstorm is coming in, and Bjørn’s only option is to abandon his lands and set sails for a new place to live.